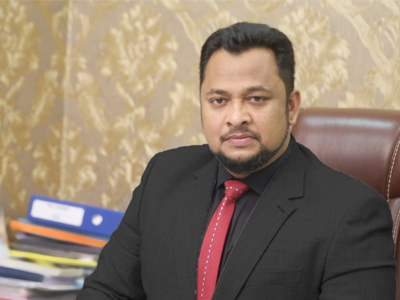 Dr. Kamrul Ahsan is blessed with the rare combination of his career portfolio as an academic; internationally recognized human rights activist; Media personality and entrepreneurial leadership. Dr. Kamrul Ahsan did his MBA from University of the west of Scotland, studied law in University of London and did his Doctorate from Europe's one of the ancients institutions namely Kharkiv National University in 2008. As the part of his humanitarian activities he has further pursued his higher studies on climate changes with worlds number one institution- University of Oxford. He has also done his Post Graduate Diploma (Level 7) in Strategic Management and Leadership.

Dr. Ahsan is leading the young entrepreneurs segment in Bangladesh and invested in the field of manufacturing industry; Banking and Financial Technology; software and service industries. . He went to UK for higher studies on Scholarship. After coming back from UK he has started meat processing business. Prince of Bahrain His Highness General Sheikh Khalifa Bin Abdullah Bin Al Khalifa, a good friend of Dr. Kamrul, personally visited Bangladesh and inaugurated the meat processing site in 2008. Within couple of years he became the market leader in this domain by supplying beef, mutton and chicken to the renowned super stores like Agora, Meena Bazar, Nandan, Shwapno, CSD and many others. In 2011 he has established export oriented state of Art food and beverages industry in Dhamrai, Dhaka, Bangladesh. Due to the political restlessness during year of 2013-14 the industry suffered a lot and started struggling. But Dr. Kamrul never stop working hard and did not keep a single stone unturned to recover the damages. In 2016 he signed the joint venture agreement with Mecca Cola World Group, France, and the first halal cola in the world. Furthermore he is the Founder and CEO and introduced with a great innovation of the fourth generation mobile financial services for the unbanked population of his motherland in partnership with Meghna Bank Ltd and Mobility One Malaysia - a leading fintech company of Malaysia; enlisted with London Stock Exchange. Dr. Kamrul Ahsan is the pioneer to introduce Near Field Communication (NFC) card based ewallet in Bangladesh in 2016.

He is the chairman of Maestro Group which is the Partner of world's first intelligent vehicle manufacturing company of China named Apollo Group Energy and intelligence car Ltd. He is the founder and chairman of Meastro Crown College and Malaysia University of science and Technology- Bangladesh Campus. He is the chairman of TFP solutions (Bangladesh)Ltd a joint venture company of TFP solutions Berhad - a leading public listed software company of Malaysia later on he has taken over the shares from this Malaysian public listed company. He is the Chairman of Maestrosoft Ltd, a tech company engage in developing Artificial intelligence (AI) and Internet of Things (IoT), Dr. Kamrul is the chairman of SwiftLink Payment services LLC, UAE, branded as “Pocket" Dr. Kamrul is the first Bangladeshi who introduced ewallet to Ewallet remittance from Middle East to Bangladesh. He is also the founder of Tap n Pay WLL Bahrain and Tap n Pay (UK) Ltd. Dr. Kamrul is the Founder chairman of Mobios Lanka Bangla Ltd, a technology joint venture company of Sri Lanka and Bangladesh. He is the Founder of GG Consortium Ltd, an India Bangladesh distribution joint venture company in Bangladesh. He has built up the E- Commerce and Ride sharing platform. Dr. Kamrul is the member of United Nations Association; Amnesty international; Human Rights watch and was the secretary General of UK based human rights organization- UK Association for Human Rights. Dr. Kamrul Ahsan has been appointed as the country head of “DIGNITE International" a French NGO working for Africa and south Asia. Dr. Kamrul Ahsan is a novelist- poet and columnist. As of 2019, four books have been published in Koshy Book fair, Bangladesh. He is the pioneer to introduce human rights based investigative Television programmer in Bangladesh namely "Bibeker Kache Prosno" televised in ATN Bangla and was rated as the best TV programme by the viewers. He is the chairman of the editorial committee of the leading news portal “Khobor71.com" and the founder of WoW play IP Television.

Academic, Human Rights Activist,Media personality, writer and entrepreneurial leadership in the domain of innovation and Technology.